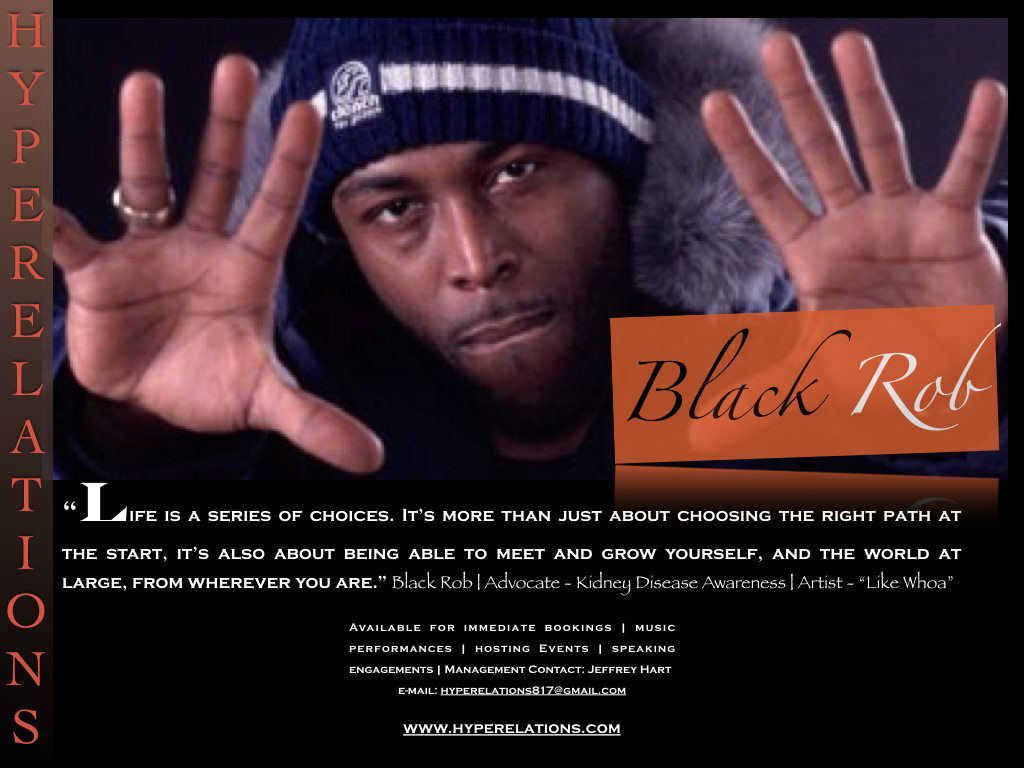 Raised in Harlem, New York, and gaining a strong footing in the music scene when opportunities for artists to be discovered and formally inducted into well known major labels in the entertainment industry were still good, Robert Ross, also known as Black Rob, was signed with Bad Boys’ Records during the same period that Christopher Wallace—Biggie Smalls—was also to be contracted into the esteemed label.

Ever growing into and becoming a more conscientious person and artist, Black Rob decided to release his hit song, “Like Whoa”, one of Bad Boys’ biggest singles to date, only after the whole east coast versus west coast controversy had subsided. Presently, Rob is working on a few movies and television show related ventures, including a character-based option with Marvel comics as well as a few endorsement deals with major electronic and stereo equipment companies. A sort after Ghost Writer who has written songs for such renowned artists as Puff Daddy and others, Mr. Ross has established himself as a positive and memorable presence in the arts.

Having gotten diagnosed with kidney failure after a long bout with alcoholism, amongst Robert’s many current goals is his pressing need to help give voice and better quality of life to people and the families of those living with and dying from the diseases of alcoholism and kidney and renal failure.

Mr. Ross has recently been touring with the Bad Boy 20 Year Anniversary tour and is fast growing his outreach efforts.

Prince Ayo is a rapper, ghost-writer, and fine-arts, artist born in the Bronx, New York, and with a current fan base that has followed his work for over a decade.

Born in Albany, New York, married to, Sunshine Wright of the original, Cover Girls, and a creative giant unto his own right, Mr. Jones comes from a family whose artistic skills are forever being accelerated as each member of the family helps in fostering the creative in the others’. Throughout his life, Charles Jones has always felt the obligation and desire of discovering and developing something magical, unique, and universally transforming.

Having spent much of his youth in search of more rewarding distractions than what his urban neighborhood usually provided those with too much idol time, Mr. Jones found refuge in the many comic books loaned him from his then closest friend. His interest grew into a readership that was as awe inspiring for him as the phenomenal fantasy worlds he would later come to create.

The depth of what he constructs on paper and interprets with technology is indescribably brilliant, there are a percentage of his characters who are culturally unique, a first in Afro-American represented characters and, what makes him stand out amongst the few other great anime-branded artists. In an industry that has been primarily influenced by Asian artists, Mr. Jones has been said to be a, “Japanese man in a Black man’s body”

Based on a group of super heroes from his childhood, Mr. Jones has also been actively drawing kit-bashing, model making and originating new forms of manga and anime for years. He is master-mind of never seen before concepts, characters, and entire galaxies and, with a talent that surpasses many of today’s major players, Mr. Jones promises to breath new ideas into the world of comic booking, animation, gaming, and many other forms of media and entertainment.